Dr S. Milan (1979) has been appointed Professor of Critical Data Studies at the Faculty of Humanities of the University of Amsterdam.

One of the most important fields of work of Stefania Milan concerns grassroots engagement of ordinary people with data and data infrastructure (‘data activism’). For example, she recently conducted research into the personalisation algorithms on social media platforms in order to reveal how companies like Facebook tailor their content to specific user profiles. Milan has published frequently on data activism and the ‘datafication’ of society.

‘I am curious about the interplay between technology and society, and I am interested in the possibilities of self-organisation, emancipation and autonomy that the digital infrastructure opens up. As a social scientist by training, I value interdisciplinary research and I feel at home at the intersection of a variety of fields, including critical data studies, political sociology, and science and technology studies.’

‘I am also interested in the challenges of datafication and surveillance, as they unfold at the margins of society, which resulted in the launch of the Big Data from the South Research Initiative. This is now a network of 400+ researchers and practitioners interrogating data from a Southern perspective.

With the coronavirus crisis, Milan devoted her attention to the incipient techno-solutionism and the emergence of a new form of poverty: the data poor. She was the co-editor of the blog ‘COVID-19 from the Margins’, which resulted in the open-access, multilingual volume COVID-19 from the Margins: Pandemic Invisibilities, Policies and Resistance in the Datafied Society (Institute of Network Cultures, 2021).

Milan is the Project Leader of Citizenship and Standard-Setting in Digital Networks, also known as IN-SIGHT. She is one of the principal researchers of the e-LADDA project, and co-leads the Digital Europe Hub of the Amsterdam Centre for European Studies (2021-2023). She is also principal of the DATACTIVE Ideas Lab. Furthermore, she is part of the team that received a grant from Team Science for a Fair Digital Society with the project Co-designing for a fair digital asylum procedure. Until recently, she was principal investigator of the DATACTIVE project, and its spin-off the Algorithms Exposed project. 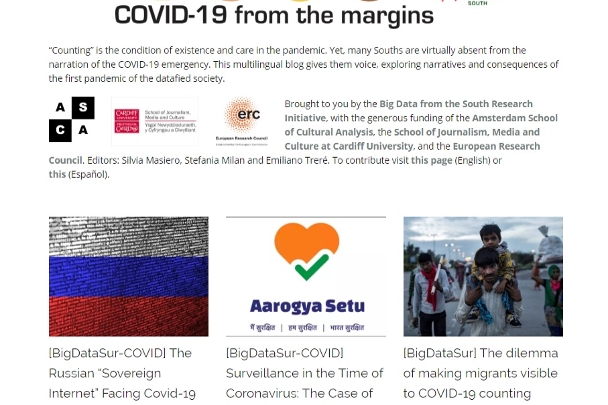 Many social groups and geographical areas are virtually absent from the narration of the COVID-19 emergency. They are given a voice in a new blog co-organised and co-edited by Stefania Milan, Associate Professor of ...